By the end of 1940 it was becoming hard not to rejoice.

The skies had been clear – or nearly clear – so often in St. Louis that everyone was beginning to count their blessings – literally.

A headline in the St. Louis Post-Dispatch reported: “Anti-Smoke Program is Bringing Business to St. Louis.”

The Union Electric Co. estimated that residents would save $35,000 this winter because they did not need the lights on as often during the day. 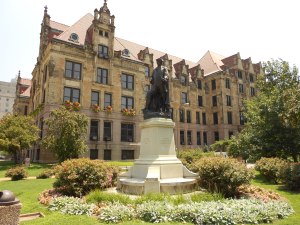 St. Louis City Hall was never lost in the smoke in the winter 75 years ago because the sky was so clear.

Travelers arriving by air at Lambert-St. Louis field as it was then called were actually landing. The year before aircraft had often been diverted elsewhere because of the smoke, and airline schedules were erratic.

Some hotels reported that bookings were up 30 percent.

Silverware and jewelry were retaining their luster – there was less hydrogen sulfide in the air.

Household pets did not need as many baths. At the municipal zoo the polar bears did not look like brown grizzlies, as they had in past winters. The white swans on the lake were not partly black from picking up scum from the water surface.

Business however was down about 30 percent for laundries and dry cleaners. Curtains at the Hotel Jefferson needed cleaning about one-third less often.

The company that cleaned the Boatman’s Bank Building three months earlier could see no soot showing up on the surface. That was unusual. In past years the first side of the building cleaned would be streaked again with soot by the time workers completed hosing down the last side of the structure.

At Shaw’s Garden no one needed to clean the palms with soapy water and sponges. Other plants were thriving. 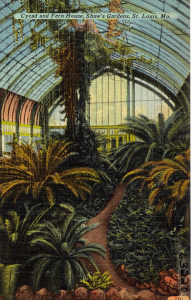 Even the plants in greenhouses were safer at Shaw’s Garden.

“Plants are much cleaner,” said City Forester Ludwig Baumann. “Last winter your hands got filthy when you ran them along the branch of an evergreen – you could have called them nevergreens. Why, our tree trimmers used to look like chimney sweeps.”

Evergreens were especially susceptible to damage from coal smoke. Yet Baumann was already considering planting more in the Municipal Plaza rather than the hearty hedges once under consideration.

Doctors were reporting that patients with respiratory issues, including asthma, sinus trouble and allergies, had been far more comfortable this winter. However they did point out that smoke was only a contributing factor to many of these ailments.

Real estate agents reported that they were seeing more families interested in moving back into the city. Many had once lived within St. Louis, but fled to the suburbs to avoid the winter smoke.

Even the astronomers were pleased. Jessica Young Stephens, an assistant professor of astronomy at Washington University, said that in the past the school’s six-inch telescope had struggled to make out the planets and the stars.

Sometimes conditions had been so poor that nothing was clear, other times the smoke would cause the stars to twinkle wildly. The density in the air caused those fluctuations in what could be seen, explained Stephens.

But this winter had been different. The stars not only twinkled less, they were brighter.

The entire universe was opening up for St. Louis.