The story so far:  On November 28, 1939, 75 years ago, a thick, black smoke covered St. Louis, turning day into night, snarling traffic and angering and shocking residents.  A Smoke Elimination Committee was created and it met through January and into February sorting out its limited options for finagling cleaning the city’s air. Its report in late February proposed that all residents and businesses buy more expensive fuel that caused less pollution. A public hearing on March 26 drew 400 people with broad support except from the coal industry. On April 8 the Board of Alderman adopted an ordinance which Mayor Bernard Dickmann signed, opening the final campaign to clean the city’s skies.

It did not take long for St. Louis to learn that they were in for a fight in insisting they would only buy cleaner coal.

Illinois officials said the St. Louis decision jeopardized the livelihood of these Illinois coal miners about to enter the mines in 1937. AP

Immediately after passage members of the Herrin City Council in Illinois met to consider a resolution calling on local citizens to stop buying from St. Louis merchants. A week later it would pass unanimously. In nearby Marion, E.R. Jones, a columnist for the Evening Post, questioned whether the St. Louis ordinance would survive the opposition from city residents. Why, he wondered, would consumers be willing to pay more for coal than they had to?

Meanwhile the editor of the Herrin Daily Journal said it was time for the people in St. Louis to stand up for their friends in Southern Illinois. Where were the meatpackers, the beer sellers and other merchants of St. Louis who got their supplies from Illinois? Could they be counted on? Another Illinois editor chimed in and said St. Louisans deserved a punch in the chin to make them see stars.

The bullying was not new. For the last 20 years Southern Illinois threatened a boycott whenever St. Louis considered a plan to clean its air. A similar boycott had been launched in 1937 when the last smoke ordinance was adopted by the city. Two Illinois-based chambers of commerce in Belleville and Collinsville had gone so far as to take out full-page ads in both the St.Louis Post-Dispatch and Globe-Democrat inviting St. Louis industries to move to Illinois. Besides offering cheap coal and transportation costs, the ad said “We have no inhibitive smoke ordinances or other city regulations which say how the coal you use shall be treated.” That boycott campaign even got an assist from the Illinois governor but it never really got going because the ordinance was so ineffective. 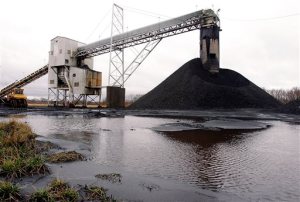 Even in recent years the high sulfur coal mined here in Illinois has continued to find buyers overseas. AP

This time the city appealed to the Roosevelt administration for help. James L. Ford, chairman of the Smoke Elimination Committee, asked the U.S. Justice Department to investigate the boycott threats. Ford contended that they were a “restraint on trade” and a violation of the Sherman Anti-Trust Act. Thurman W. Arnold, known as the “trust buster” for the U.S. Attorney General, promised to look into it.

While city officials prepared for the boycott, they knew they had other issues also to contend with. For one, Smoke Commissioner Raymond Tucker’s staff would have to be increased to enforce the ordinance. Because suddenly, cheap high-sulfur coal was illegal the same way bootleg liquor had been during prohibition.

Coal dealers would have to sell only higher grade coal and chimneys and smokestacks would be scrutinized to make sure they were not emitting high levels of smoke. Anyone repeatedly caught violating the standards would risk the possibility of having their boiler sealed the following summer.

The city would also have to begin finding someone to supply coal, in case local dealers balked. Already secret negotiations had begun between the city and a series of suppliers in Arkansas.

Finally, Tucker knew the only way to truly win this fight was to convince the citizens of St. Louis it was in their best interest. That meant going to local meetings and gatherings and speaking on the radio and to the newspapers as often as he could.

It was only April. He had six months.

He knew, it was going to be a long six months.