A woman wrote to Smoke Commissioner Raymond Tucker during the summer of uncertainty of St. Louis in 1940

The railroads were being counted on to deliver the Arkansas coal. Raymond Tucker Archives, Washington University

“Could you tell me what widow women like me are going to do about this coal proposition,” she asked. “I am worried sick about it.”

She only was making $16 a week, she had a family to support, and she wondered how she was going to pay the rumored price of up to $8 a ton for coal.

“I would rather put up with the smoke than to see my family freeze,” she wrote. “I know you don’t realize how we poor people have to scratch to get along.”

But the city had already been working on such a plan to aid residents, especially the low income, since April when it adopted a new law aimed at cleaning the winter skies.

The first step was to approve a $300,000 revolving fund so that the city could buy coal wholesale and supply it to residents. If local coal dealers were unable to acquire the more expensive, and cleaner coal, that the city now demanded its residents burn, then the city would do it.

Then the city began negotiating and reached an agreement to buy up to 1.5 million tons of high-grade coal from Arkansas mining interests. As part of the deal the Frisco Railway agreed to haul the coal at the cut-rate price of $2 a ton.

That meant that the price would be about $5.50 a ton. That was somewhat higher than the $3 to $4 a ton many in St. Louis had been paying for their high sulfur coal that was now illegal. But it was slightly better than the higher grades sold by Illinois dealers, and it was a large, guaranteed supply.

But a problem developed almost immediately.

Not only did the coal miners and owners loudly protest the deal. But competing freight rail companies vowed to oppose the rate plan when it was considered by federal regulators.

Illinois coal miners and owners had already begun a drive to boycott St. Louis goods in retaliation for the city’s refusal to buy its cheap, dirty coal. Now, they were even more incensed. 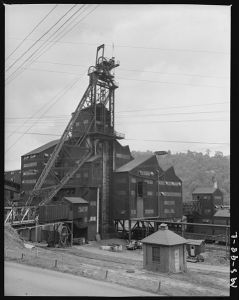 Coal workers at mines like this is Illinois remained very worried.

Ray Edmundson, president of the Illinois state chapter of the United Mine Workers, said the plan to buy the Arkansas coal was “a treasonable act against the coal miners and mining communities of this state.” He said it would “result in further unemployment, want, hunger and misery to the already thousands of unemployed miners in Southern Illinois.”

Retail coal dealers in St. Louis were not that much happier. The agreement projected that the dealers would sell the coal at $5.50 a ton but when they did the math they realized that their profit margin would only be about $1.50 per ton. They said that was too low, they would be ruined by such a low margin.

The competing rail companies simply did not like the new rate that Frisco Railway was seeking. In a time when interstate prices for such precious commodities as coal were still strictly regulated, a consortium called the Central Freight Association filed a protest with regulators.

The problem with the plan, they contended, was that it was “designed solely to appease pressure groups in St. Louis which have sponsored a policy to secure high grade smokeless coal at low (prices) without regard to transportation services or other factors considered in the making of reasonable and non-discriminatory freight rates.”

St. Louis municipal officials meanwhile pressed for approval of the plan and told local coal dealers that the marketplace would ultimately determine the price and how much the merchants would make in profit.

Local newspapers were less restrained. As the St. Louis Post-Dispatch pointed out in one editorial, the city had an excellent new law to reduce pollution. “But if we go no further, skies will be as black next winter as last.”

The St. Louis Star-Times said that Illinois coal operators could work together in the same way as Arkansas dealers have done, just as rail companies could compete with the Frisco rate plan.

Besides, said the Star-Times, the city had suffered enough from the air pollution caused by coal.

“If our people are willing to pay reasonably higher prices, at last, to conquer smoke,” an editorial stated. “The business of those who supply our market is to acquiesce in the city’s demands and furnish a fuel which meets our needs for both quality and price.”