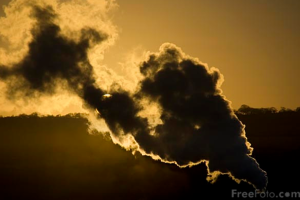 St.Louis was fighting coal bootleggers to stop the clouds that had pestered the city for decades.

Sandy Ford did not run until after the city inspector flagged down his truck on a cold winter night. Henry Kessler suspected that Ford was hauling bootleg coal and that was confirmed when Ford jumped out of the truck and ran away.

Kessler pulled out his revolver and fired. But he only aimed at the asphalt and Ford did not stop running.

A second man in the truck, Robert McFadden, was charged with hauling illegal coal. Ford gave himself up an hour later at the police station and was also arrested.

Ford contended that the only reason he had fled was because he knew that he and McFadden would need a bail bondsman.

He brought one with him to the police station, and the two men were quickly released.

By the end of the week 20 coal peddlers had been arrested for selling bootleg South Illinois coal in St. Louis where it was illegal. This was January, 1941 and the reason the city had drastically increased its staff of smoke inspectors up to 18.

Bootlegging coal dealers faced misdemeanor charges, which meant that they could usually avoid jail, but they also could lose their licenses for such activity. Many were caught by inspectors stationed on the bridges from Illinois to St. Louis.

Today, the very term smoke inspector sounds quaint, more related to tobacco or fire prevention than air pollution. But beginning in the late 19th Century and continuing into the 1950s cities throughout North America and Europe routinely relied upon smoke inspection staffs as one way to control pollution from the burning of coal.

The first efforts to control smoke in cities such as St. Louis began in municipal health departments. Some cities would create separate smoke inspection offices both to enforce existing laws and to run educational programs. The number of inspectors could vary widely. New York City at one point reportedly had 400 smoke inspectors while nearby Philadelphia only had two. They could also range from trained engineers to common laborers. 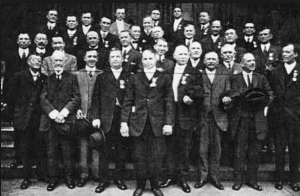 Smoke Inspectors gathered at their annual conference in 1904.

In St. Louis the Division of Smoke Regulation was created in the Department of Public Safety in 1937. Smoke Commissioner Raymond R. Tucker and his staff of 13 smoke inspectors were responsible for examining furnaces, inspecting coal supplies and educating the public.

Once the new ordinance was passed in April 1940 Tucker and his staff also relied upon private citizens to help that identify specific chimneys emitting bilious clouds of black smoke. Normally a homeowner or small business owner would not be cited for a violation of the law unless they were caught at least three times. Often they simply did not understand how to operate stokers and other mechanical equipment added on to boilers to reduce pollution.

But it was never an easy task and often inspectors would be torn between their responsibilities. What was more important, inspecting wholesale yards for signs of illegal coal, that is soft coal with a high sulfur content, or being out on the streets searching for suspect chimneys?

Sometimes it was not even clear to Tucker who he should be most worried about.

Shortly after the new ordinance was adopted in April someone claiming to be a city alderman proposed selling a list of people who had been violating the law but not prosecuted. He phoned and asked George Hale, secretary for the St. Louis Stoker Association, if his members would buy the list.

Hale conferred with his members who agreed that they would prefer dealing with Tucker directly if such a list existed. Tucker confirmed that there was such a list but it was confidential.

Tucker then called a meeting of his staff and told them it would be “too bad” if someone in his office passed the list to anyone. The story quickly spread to the city’s three newspapers.

Hale may have known the name of the “alderman” but by the time the newspaper reporters got to him he had forgotten it.

Banning coal was causing all kinds of unexpected headaches.