The story so far:  On November 28, 1939, 75 years ago, a thick, black smoke covered St. Louis, turning day into night, snarling traffic and angering and shocking residents.  A Smoke Elimination Committee was created and it met through January and into February sorting out its limited options for finagling cleaning the city’s air. Its report in late February proposed that all residents and businesses buy more expensive fuel that caused less pollution. The question now was whether the city government, and then the city’s residents, would comply.

Besides having a crusading publisher, a hard-nosed reporter, and a colorful editorial page editor, the smoke campaign launched by the St. Louis Post-Dispatch had one other weapon – cartoons.

Political cartoons, produced by the dean of the profession and one of the best of his time, Daniel Fitzpatrick.

Hw may never quite as colorful as some of his colleagues in his in his forty-five year career at the Post Dispatch, but his drawings made up for that omission.

He struggled in school in Superior, Wis. to the point where he finally dropped out of school. He was spending too much time drawing as opposed to studying history or algebra. His mother asked him what he planned to do.

Become an editorial cartoonist, he replied.

He studied two years at the Art Institute of Chicago and got a cartooning job with the Chicago Daily-News. In 1913 the Post-Dispatch hired him. He would remain there until 1958. The Post-Dispatch already had a history of hiring the top political cartoonists and that would continue after Fitzpatrick. Among the greats who spent much of their careers at the Post-Dispatch were Tom Englehardt, Bill Mauldin and Mike Peters. 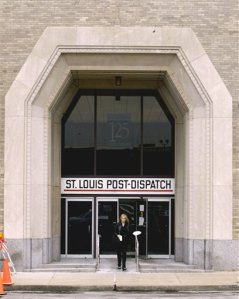 During the smoke campaign Fitzpatrick had already won one Pulitzer Prize, in 1926 and he would win a second in 1955. Time called the sandy-haired, white-mustached Fitzpatrick one of the four top cartoonists in America.

He was a political liberal who seemed to always side with the underdog while attacking what he considered “the conservation establishment.” His targets included Adolph Hitler and the growing menace of the Nazi regime in Germany, and Missouri political boss Tom Pendergast.

He seemed never afraid to take a stand, even if it displeased his boss. Three years before when Pulitzer and the Post-Dispatch supported Republican Alf Landon over Franklin Roosevelt, Fitzpatrick refused to go along and expected to be fired. Instead, Fitzpatrick said that the response he got from Pulitzer was the remark “Sorry you couldn’t go along with us.”

Editorial Page Editor Ralph Coghlan, who worked so closely with the cartoonist, once called Fitzpatrick a “radical” in the tradition of Thomas Jefferson or Tom Paine. “Fitz has a profound contempt for ‘stuffed shirts.’ He sees through their masks. He hates the greed of this gentry. Fitz wants democracy to work,” Coghlan wrote.

Both Fitzpatrick and Coghlan were fined and jailed after they criticized a local judge for freeing a public official who had been criminally charged with helping bribe a union leader. The case, which occurred virtually the same time as the smoke campaign, became a major first amendment issue nationally. Eventually the fines and jail sentences were overturned.

Political cartoons struggled at times for respect, but Fitzpatrick was often praised by those who understood art and political expression. In 1941 a New York art gallery displayed 45 of Fitzpatrick’s cartoons and upon his retirement he donated 1,750 of his original drawings to the State Historical Society of Missouri. Fitzpatrick would live until 1969.

Even his retirement in 1958 drew comment from Time magazine under a story headlined “The Hell-Raisers.” One hallmark of a Fitzpatrick cartoon was a dingy space he labeled Rat Alley, which had become the cartoon home for the worst of the crooks.

One of those Missouri politicians assigned to Rat Alley once complained to the Post-Dispatch, “I could answer your editorials, but what can you do with that guy who draws cartoons?”

According to Time, Fitzpatrick replied: “I’ve made an awful lot of people goddamn mad.”

By now Spring was underway and the smoke was no longer billowing over St. Louis. But an awful lot of people were goddamn made.