Seventy-five years ago St. Louis mounted a great effort to rid itself of air pollution that had plagued the city. In a different take, this column examines the current experiences of other cities.

New Delhi has the dirtiest air of any city on earth.

That was the verdict of the World Health Organization in 2014 after it studied the air of 1,600 cities worldwide. Over the next two years stories have appeared virtually daily both in Indian and international news outlets about the dangers of New Delhi’s air pollution.

Often China and especially Beijing are the focus of attention about how dirty its air has become. Yet a study released in December, 2015 by Greenpeace India and East Asia said that at least Beijing has an alert system, which closes schools and factories and cuts traffic levels in half when the air gets to a dangerous level. If that system were in place in New Delhi, according to the Greenpeace report, the alert system would have been activated 29 out of 30 days last November. 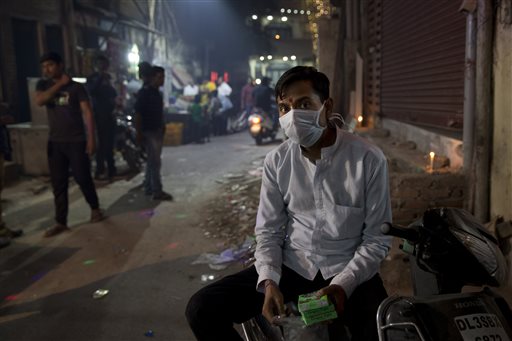 An India man wears a face mask to protect himself from smoke during Diwali celebrations, or the festival of lights, on Nov. 11, 2015 in New Delhi, India. A day after the festival, the air pollution across New Delhi was very severe to critical in various parts of the capital region.  AP Photo

In January, 2016 the New Delhi government finally responded to the air crisis, which occurs each winter, by enacting a two-week experiment. Only private vehicles with license plates ending in odd or even were allowed on the roads in succeeding days, with Sunday exempt.

The New York Times reported that many residents were furious about the ban in a city where having a car and a driver was a status symbol and rush hours bumper-to-bumper traffic was endemic.

“If you want to call me snooty, all right, I am, because that is my lifestyle and that’s how I work,” Promila Bij told a Times reporter. She had arrived late for work after taking taxis while her three cars and drivers stood idle because their license plates all ended in odd numbers. “You cannot say ‘change your lifestyle’ at the snap of a finger.”

For years New Delhi residents had tolerated the worsening air pollution because they seemed powerless to change it.

But the rash of publicity seems to at least be affecting some governmental officials. It had been news stories published in St. Louis 75 years ago that had finally helped push the government and civic leaders to make reforms to curb the city’s vexing air pollution problems.

Much of the news has been about New Delhi’s increased health complications related to the air pollution. The Centre for Science and Environment in India reported in December, 2015 that 10,000 to 30,000 New Delhi residents die each year of illness directly related to the city’s air pollution. Another 620,000 die of illnesses that might be caused by pollutants in the air.

When President Barack Obama visited New Delhi in late 2014 one scientist estimated that the President might have lost six hours of his life span by spending three days breathing the city’s air.

In June 2015 the city agreed to begin publishing daily bulletins about the city’s air pollution levels. By late January the government was meeting and discussing what else it could do, including banning many trucks from entering New Delhi and imposing strict dust controls on construction sites.

The Indian national flag flies as a thick layer of smog envelops the city skyline on Nov. 12, 2015, in New Delhi, India. AP Photo

Even while the experiment was underway many residents had been skeptical about its chances for showing anything. Sixty-five year old Veena Dogra told the New York Times that she planned to continuing coping with the pollution and avoid the air purifiers and face mask that many neighbors donned.

“You have to be tough to live in New Delhi,” she said. “If you’re not, you should leave. And I have too much family here to think about doing that.”