Seventy-five years ago St. Louis mounted a great effort to rid itself of air pollution that had plagued the city. This column is the third in a series examining the experiences of other cities.

What it consisted of was a toxic soup of smoke, particulates and chemicals sometimes mixed with meteorological fog that had clouded London for centuries. The phenomena has been described many times and one of the best new profiles is London Fog, A Biography, by Christine Corton, published in November, 2015 by Belknap Press.

The book is partly an account of the political, scientific and economic factors that allowed London fog to persist until the late 20th Century. In this respect, it will be familiar to those who have followed this blog and the trials of St. Louis.

As in St. Louis, London’s topography was a broad river valley that often trapped pollutants on both shores of the Thames. London fog was produced by burning coal, both from industry and also in the winter from the households of tens of thousands of residential chimneys. That was no different than St. Louis and other American cities.

With science uncertain of both the cause and the dangers, arguments in London about burning cleaner hard coal floundered – just as in America. While St. Louis and other cities began as early as 1940 to make a concerted effort to reduce air pollution, Londoners delayed.

Corton does note that fog was the thickest in the 1880s and 1890s and helped define London’s character in Victorian England. Yet even as late as 1962 London was afflected by huge toxic blankets that sat over the city for days.

The fog is Corton’s is the narrative thread of the book. Sometimes she deals with its political and social impacts. More often she examines how the fog impacted British arts, from literature to artists.  It was Herman Melville who coined the term pea soup; Charles Dickens who made London fog a villain in many of his novels; and Claude Monet whose paintings cloaked London’s Charring Cross Bridge in a swirl of colors as the fog filtered sunlight through the day.

American writers including Nathaniel Hawthorne and Mark Twain often reacted negatively to London’s fog, Corton reports. They would liken the dark clouds at the very least to the “supine indolence of the Old World” and at its worst to a form of Hades or Hell.

Yet many other writers could not resist weaving the dark swirl of a pea soup into their plots, whether they were Henry James, H.G. Wells, Joseph Conrad or Arthur Conan Doyle. While the real Jack the Ripper preferred clear nights to assist in his hunt for victims, Robert Louis Stevenson in Dr. Jekyll and Mr. Hyde employed the London fog to assist the villain Hyde in his first murder. The next day “a great chocolate-coloured pall” of smoke or fog hung over the city, a metaphor for the arrival of a great evil.

Fog obscured shapes and colors. That may have frustrated many English landscape artists but it absolutely delighted an impressionist such as Monet. “London is the more interesting that it is harder to paint,” he once wrote. “The fog assumes all sorts of colors, there are black, brown, yellow, green, purple fogs, and the interest is to get the objects as seen through all these fogs.” 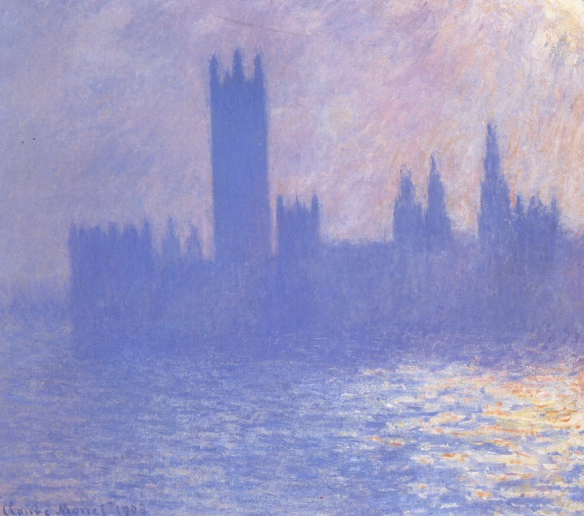 Parliament buildings in a London fog as depicted by Claude Monet.

The book is filled with artist’s renderings of London and its fogs, from paintings by James McNeil Whistler to woodcuts taken from pulp magazine stories about the fog.

But for those who lived and breathed London’s foul air every day life was less than romantic. The cold and smoky air in a year such as 1886 resulted in 11,000 deaths from bronchitis. A single week in December, 1891 killed 700.

No period is more famous, however, than the “Great Killer Fog” of 1952 when a belt of yellow fog descended on the city and lasted for a week. Traffic stopped, so did business, commerce and social life. The death estimates vary, from 4,000 up to 12,000.

Today the era of London fog is gone, a relic nearly as forgotten as link lighters, the men and boys who were employed in the early 19th Century to illuminate dark and fog shrouded avenues. Link lighters were supposed to be a hedge against thieves, but too often they themselves turned to crime.

While it is hard to understand today how Londoners could have tolerated the fogs and their dangers, today we can find many parallels. They are not just the dangerous conditions and air that hang over developing cities such as Beijing and New Delphi as profiled previously here. It is also the fossil fuel produced crisis we call climate change which is melting polar ice caps, raising sea levels, flooding coastal areas and increasing threats ranging from famine to more great storms.

We have known of these threats for years, yet we have done very little to stop them.